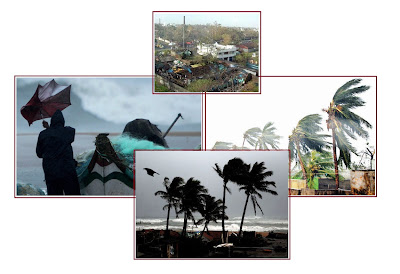 A very severe cyclonic storm known as Cyclone Thane, which is considered as the strongest tropical cyclone of 2011 within the North Indian Ocean. Thane initially developed as a tropical disturbance within the monsoon trough to the west of Indonesia. Over the next couple of days the disturbance gradually developed further while moving towards the northwest, and was declared a Depression during December 25, before being declared Cyclonic Storm Thane during the next day. After its development had slowed down during December 27, Thane became a very severe cyclonic storm during December 28, before as it approached the Indian states of Tamil Nadu and Andhra Pradesh, it weakened slightly. Thane then made landfall early on 30 December 2011, on the north Tamil Nadu coast between Cuddalore and Puducherry ‘Thane’ left a trail of destruction majorly in Cuddalore district and Puducherry and also impacted Villupuram and Nagapattinam districts in Tamil Nadu. 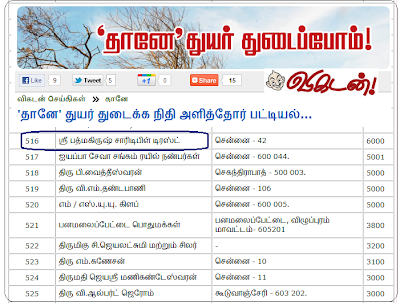 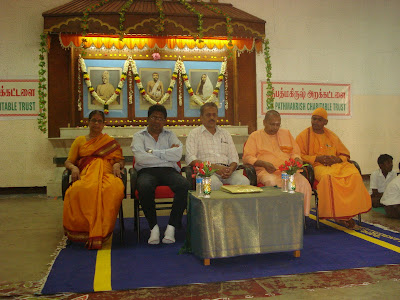 Celebrating National Youth Day and Swami Vivekananda Birthday
by Sri Pathmakrish Trust conducts a programme for fecilitating
Sri Pathmakrish awards to school & college students On 12-01-2010, Tuesday.
Sri Pathmakrish Charitable Trust under the leadership of Compcare K. Bhuvaneswari (CEO-Compcare K. Bhuvaneswari) conducted a written competition for school and college students on 07-01-2010. Around 200 students were participated in that function.
It was heart warming to see the youngsters writing worthy articles on the title “Save the Earth and Stop Global Warming”
On the National youth day (Swami Vivekanantha’s Birthday) 12-01-2010 a function was celeberated in Ramakrishna Mission Students’ Home, Mylapore with 500 students.
It is presided by the R.K.Mission Students’ Home Secretary Rev. Swami. Satyajanananda and the Correspondent Swami Indunathananda.
Mr. N. Sadagopan (Editor-Vijayabaratham) gave an excellent speech on the scientific details on Global warming.
The student’s of Sir. Sivasami Kalalaya – Mylapore enthralled the audience with a wonderful street play – Therukkoothu “Pasumai Pattinam – The Great City”
The welcome speech was addressed by Ms. Compcare K. Bhuvaneswari and a vote of thanks was given by Mr. V. Krishnamurthy and Ms. K. Padmavathy, the pillars behind the Trust.
Posted by Compcare K. Bhuvaneswari at 7:52 PM No comments: 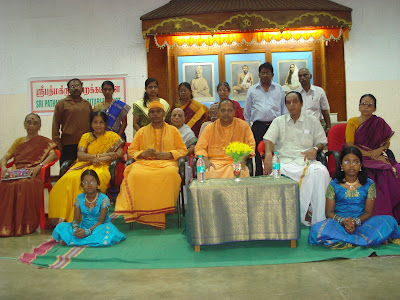 Sripathmakrish Charitable Trust, Chennai celebrated  Children’s day at Sri Ramakrishna Mission Students’ Home at Mylapore on 14th November 2009.
The Secretary of the mission Swami Satyajanananda and the correspondent  Swami Indunathananda  presided  over the function.
The Chief Guest was Dr. Saraswathi Ramanathan. She motivated the children by her valuable speech.
Savithiri  Ramakrishnan narrated moral stories from Ramayana and Mahabaratham.
Dr. Santhanaraman and Dr. Hema Santhanaraman narrated Thirukkural  based  moral stories.
Carnatic and Devotional  songs were sung by Selvi Vinthiya  and Selvi Reshmi along with their parents Ms. Nalini and Mr. Pari.
Finally, the CEO of Compcare Software Private Limited
Compcare K. Bhuvaneswari spoke about  ‘Talent Based Computer Education’ with  Mordern Technology and
motivated the students through a
CD Show of
‘Thatha Patti Kathaigal’, ‘Peran Pethi Padalgal’ and ‘Daily a Fruit’ in Tamil.
The programme ended with the speech of  Mr. Krishnamurthy and Ms. Padmavathy, Chief  Secretaries  of the Trust.
Posted by Compcare K. Bhuvaneswari at 7:52 PM No comments: 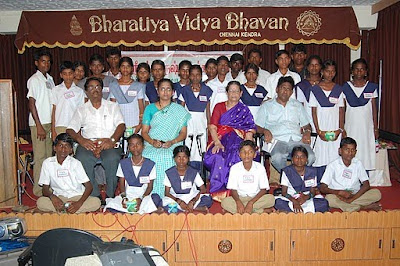 The Children from TGS Ashram entertained the audience with dance, drama and music. The people present were amazed by the talent of youngsters.

Kalaimamani Koothabiran enjoyed thoroughly with children by conducting quiz and other programmes and enhanced the day.

One of the singers dressed as Makkal Thilagam MGR, singing and dancing on the stage was greatly appreciated by the audience.

Along with these programmes, children enjoyed programmes like Computer  Education, the wonders of Multi-Media and other Special Educative Programmes.

Moreover lots of prizes were given to the children to encourage and motivate them.

Totally 15 achievers were seleced by the Trust. These people have worked tirelessly for the common people, creating opportunities towards uplifting them.All 15 achievers were unknown to the public as they shied away from publicity of any kind.

Sri Pathmakrish Charitable Trust takes great pride in presenting Awards to them. The day’s prgramme ended with an excellent lunch.
Posted by Compcare K. Bhuvaneswari at 4:35 PM No comments: 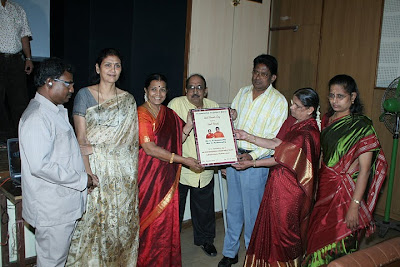 Right from our young age, my sister Sri Vidya and my brother Swaminathan and myself, we celebrated Diwali, Pongal and other Indian Festivals with the inmates of the orphanages near about.
This method of celebration was greatly encouraged by my parents. My mother Mrs. Padmavathy was a Senior Telephone Supervisor and my father Mr. Krishnamurthy was a Sub Divisional Engineer with the Telephone Department.
In their 40 years of professional life sincerity honesty and hard work was the ladder with which they climbed and reached the peak and retired as the Central Government Employee.
For the three of us it was fun all the way, as they were transferred to more than 30 places in Tamil Nadu!. It was the new place, new circumstances, new people that made us what we are today- Energetic, Imaginative and Enthusiastic in our approach to everything in life.
I started the ‘Compcare Software Private Limited’ 17 years ago and I am known as Compcare K.Bhuvaneswari! Sri Vidya and Swaminathan are working in USA as software professional.
As we are used to celebrating the festivals with the inmates of orphanages, I started celebrating our company Annual Days, along with the staff of Compcare Software Private Limited in the same manner.
Initially the staff members were greatly surprised and asked “Will the inmates welcome us among them?” They thoroughly enjoyed the occasions. That was the answer given by the inmates to us.
This was an eye opener to me. Even without realizing how to help, I have been doing something towards the down trodden single handedly.
Why not join with the others and help more and more people in a better, fulfilling way?
The above questions was the base for stating the Sri Pathmakrish Charitable Trust.
The name Pathmakrish is the shortened name of my parents. September 4th, the month of my parents wedding day was selected and on the same month i.e. September 2nd, 2007. (02-09-2007) our Sri Pathmakrish Charitable Trust was born.
The day was named as ‘Ideal Parents Day’.

Dr. Saraswathi Ramanathan, a renowned Tamil Exponent was the Chief Guest and our Special Guests were:-
Mrs. Jayashree Ravindren, – Executive Director, Ability Foundations, Chennai
Mr. Jayachandran, – Reader, Department of Tamil, Presidency College, Chennai
Mr. H. Ramakrishnan – Television Journalist,Chennai.
Compcare Software Private Limited released a Documentary Film titled
“Anbulla Appa Ammavukku (Dear Mom and Dad………)
This 1-1/2 hours documentary, featured my parents, our upbringing, the bondage between my parents and ourselves, which was never affected by the so called generation gap.
The documentary film was very well received as it helped other people to think in different ways.
Vani Mahal, T.Nagar – the venue of the function was filled with appreciative audience.
Posted by Compcare K. Bhuvaneswari at 6:41 PM No comments: